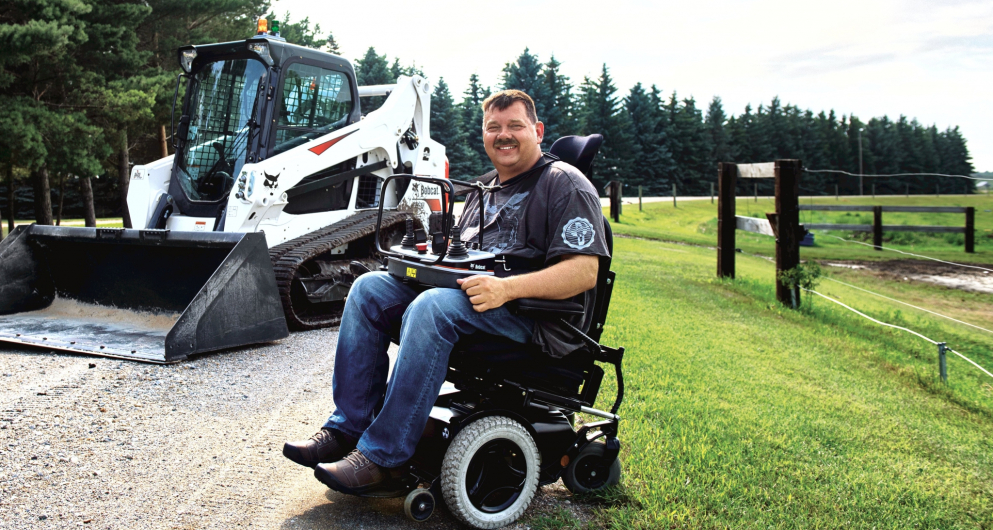 Trevor Brown positions his hands on the controls of his Bobcat® compact track loader and turns the key. The engine roars to life. He reverses the machine out of its storage spot, then directs it to a nearby pasture to install a fence – all from the seated position of his wheelchair.

“It brings back a huge piece of my life that I can actually do things again and make a difference,” Trevor says.

In 1991 Trevor quit his woodworking job to launch a custom cabinetry business called Tailored Cabinets and Design, running it out of a shop on the family acreage. His wife, Charlene, helped with the work, and a Bobcat 743 loader helped the couple do the rest – removing barrels of wood scrap from the router and handling other farm tasks. The business grew. They hired a few workers and, over the next 15 years, completed hundreds of kitchens.

In late 2007, however, Trevor scheduled a routine surgical procedure after suffering from neck problems. He woke up paralyzed. The doctor had botched the operation, and Trevor went from running a thriving business to fighting for every breath as a quadriplegic in the intensive care unit.

“When Trev was injured it was a huge shock to us,” Charlene says. “He would just go, go, go. Always busy, always building something. Just devastating because we both realized that this was a huge change.”

Trevor remained in the hospital for the rest of the winter to adjust to his new condition. The couple’s two children, aged 12 and 16 at the time, pitched in around the farm, but Charlene was left to do much of the acreage work herself.

“There was a lot for me to learn in order to run things on my own,” Charlene says. “We were questioning whether we could make things run and keep going. He was always looking for ways to make my jobs easier.”

The Browns decided to upgrade to an S185 skid-steer loader with an enclosed cab in 2008 so that Charlene would have heat for snow removal and air conditioning for summer work. That spring, Trevor was discharged from the hospital and returned home with the hope that he might regain some function.

“As months went by, I began to realize that I’m not getting better, I’m not recovering,” Trevor says. “I began to think ‘OK, where are we going to go from here?’”

“Most things I couldn’t do anymore. I came into my world of tools and equipment, and I couldn’t touch any of it for years. I loved my work. It was the hardest thing to find myself lying in bed all of a sudden, not able to move. It’s a long recovery, just emotionally, to see what I lost that day.”

Trevor’s paralysis completely changed the cabinet business. Work came to a standstill, and he had to let his two employees go. But Trevor was determined to find a way to stay in woodworking. He had purchased a computerized woodworking router earlier in 2007 and began focusing his efforts on programming the system with his designs.

Although Trevor can no longer do custom kitchens from start to finish, he and Charlene now cut cabinet components for other contractors using the digitalized designs. Trevor programs the router, and Charlene loads the wood for cutting.

While Trevor had found a way to stay in the woodworking business, he had yet to regain his independence on the acreage and saw the toll it was taking on his wife.

“Her workload was so incredibly heavy, and I saw that. Broke my heart,” Trevor says. “I guess right from day one after the injury, I began imagining, ‘How can I make this easier for her?’ I’ve always been a hands-on guy with equipment and with tools so I thought right away, ‘Well, what kind of equipment do we need that can help us through some of these challenges?’”

That’s when Trevor noticed a sticker on the S185 that said, “RC ready” and learned from his dealer that Bobcat Company offers a radio remote control kit for its compact loaders.

“The remote control was in the forefront of my thoughts during all those years,” Trevor says. “That was one of my goals: to eventually get the remote control and be able to operate the machine without being in the machine, from the position of my chair.”

Because of his condition, Trevor has to remain in a custom-molded wheelchair to avoid health risks. The remote control would let him operate a Bobcat compact loader and attachments as normal while staying safely seated in his chair. The Browns began saving money and were able to upgrade to an M2-Series T595 compact track loader with a radio remote control kit in December 2016.

“I can grab this thing off the countertop and put it over my shoulders, start the machine and go,” Trevor says. “It’s been a game changer for me because for quite a few years, I’ve had to sit here not able to tackle the jobs that I’m looking at on the yard and now I have a way to do it.”

Charlene says Trevor struggled in the past to ask others for help with physical tasks around the farm. Being able to now do the work himself has boosted his self-esteem.

“When they put the remote on Trev and he started driving this thing on the yard, the look on his face was just priceless,” Charlene says. “Just the sense of awe for him, that now he had a powerful machine to do big things. He’s not waiting anymore for anybody. His sense of independence is just boosted 500 percent. Doing things well and doing them right – this machine is just the perfect thing.”

The first job Trevor took on with his remote control machine was clearing snow from the acreage’s large driveway. Semi-trucks make weekly deliveries to the woodworking shop, so the area must remain accessible. Snow bucket and snow blade attachments let Trevor push the snow at multiple angles, giving him versatility.

“It’s really nice to be able to push the snow sideways with the snow blade, and then we’ll use it as a box blade if you put those sides forward,” Trevor says. “This winter, I could sit in the yard in the van where it was warm and clear snow from the van. I’ll often be busy for more than a day, sometimes after every snowfall.”

The Browns live next to 55 acres of hardwoods, and Trevor uses the loader and a utility grapple attachment to remove fallen trees and transport them to his sawmill.

“It’s been hard for me to sit in a wheelchair without my arms, but this is where the grapple comes in,” Trevor says. “We go in and clamp on with the grapple and just take it right out of the bush. I set it right on the sawmill and get pretty close to position. Took a lot of the hand labor out of moving these big, heavy logs.”

The grapple is also helpful for moving hay and manure, Trevor says, while an auger with an 8-inch bit helps install fence posts for new cattle pastures and horse corrals. The snow bucket plays double duty in the off-season months by hauling raked pine needles from the pine grove and barrelfuls of wood scraps from the router.

To prepare for a concrete pad outside the barn last summer, Trevor used a bucket to dig a trench around the location, fill it with gravel and pack it down. Trevor says the machine’s rubber tracks provide better flotation on the barnyard’s soft dirt than his previous skid-steer loader, and the 2-Speed travel option improves his productivity.

“With the (multiple) speed controls, I can operate really accurately,” Trevor says. “When I’m moving a bucketful across the parking lot, I can be in a fast speed, and when I get close to the building and I’m cutting something, I can just switch it and go down in speed. That gives me time to work the controls and operate.”

The radio remote control system and new machine have brought back an adapted sense of normalcy to Trevor and Charlene.

“We’re usually up and out all afternoon and all evening,” Trevor says. “We work like we used to, all day long. And there’s seldom a day where we’re going in before 10 in the evening. I grew up on this farmyard since 1971. We just enjoy the country living, the rural life. We can’t imagine ever moving away. With my injury, the equipment becomes a really important part of us being able to keep up and keep on top of the work that needs to be done on a daily basis.

“To learn how to operate this machine through the remote has been a lot of fun. It’s probably been the most fun I’ve had from a seated position in a wheelchair for nine years. Just because of what I can get done.”