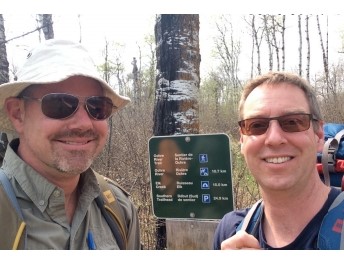 Part One - by Curtis Halbesma

Peter Bergs and I had a pastor’s gathering at noon on Tuesday, May 10th, up at the Ochre River church. Given that it is quite close to Riding Mountain, we decided to hike Monday afternoon and camp overnight. This would give us a chance to go camping and try out some of our new gear. Because we had to be at the gathering by noon (and at Brad’s home, the local youth pastor, just before that to have a shower), we decided to climb up the mountain on the first day. We could hike downhill, and thus be faster, on the way out. This meant starting at the north end of the Ochre River trail. There was no parking lot on the map for this entrance, but it seemed like there should be one so we gave it a try. We followed the lines on the map (sketchy directions, at best) and, sure enough, found a parking lot. The trail from the north entrance to the first official camping spot was a 10.7 KM hike. For us, this should be easy. However, it turned out this part of the trail had not yet been cleaned up from winter. Blocking the trail were a lot of branches which were constantly poking or cutting up our legs and arms. For some reason, my skin doesn’t seem as tough as Pete’s, I end up with more cuts than he does.

There were also a lot of wet, mucky areas that forced us to either walk carefully on the edge of the trail or cut a new path through the scrub brush. Not enjoyable, but part of the hike experience. There were an incredible number of wood ticks. Every five minutes or so, we would pull half a dozen off our legs. I’m not sure why, but they seemed to prefer Peter over me. It took us a couple hours to get to the first camp site. It was longer than I expected. From that point on though, the trail was groomed. We decided to try for the next site, 4 ½ km away. After about an hour, Pete said his ego wanted to get to the site, but there was another voice telling him to turn back. I liked the sound of the second voice. From where we were talking we heard the sound of rushing water. We climbed a hill to find a winding mountain stream beside a small grassy plain. We stopped there for the night.

The next morning we got up around 5:30. Pete said he had a pain in his chest under his lower right rib. We asked all the “Left arm? Heart issue?” questions. He also said his feet were numb. We ate breakfast and packed up to go. I was ready before he was, which was odd. I’m usually the slow one. As we started the return hike, he said he felt foggy. He seemed sad. I grabbed his hand to walk him up the first hill. “Come on, you can do this. And don’t you dare tell anyone I’m holding your hand as we walk. In other cultures they do this all the time”. “Well, not in ours”. We walked to the Cairn Cabin junction, which was not far. He laid down on the grass and asked me to put my pack under his feet. He said it felt like his feet were asleep. Numb. I don’t recall if he said they felt like pins and needles or not. Truthfully, I didn’t fully process what he said. I didn’t stop to think about what the sensation might be like. We chatted for a bit, then he got up and we kept walking. Just before the Ochre Trail campsite (the one we passed the day before), there is a mountain stream that needs to be crossed. We stopped to take off our boots and walk through. With the packs on, the rocks are quite uncomfortable. I crossed first, dropped off my pack, and went back to help Pete. I told him I would carry his pack and he could use my walking stick. Part way over, he cursed a little and got down on all fours. He felt he had cut his foot (I don’t remember seeing a cut, but clearly something had hurt him). Once we both got across, we walked up to the camp site junction and he stopped to rest and check his feet. He asked if his ankles were swollen but I didn’t see anything. I went to refill the water bottles with the water filter as it was the last good point to get water. It took a long time to fill the bottles. As we got going again, he said the numbness was moving up his legs.

The 10km back to the car was the ungroomed trail. There were areas of swamp, muck, and lots of scrub brush. As we went along, Peter was increasingly unstable on his feet. He was stumbling back and forth. He said he didn’t know if his feet were stable until he put his weight on them. My full attention was on him. He was starting to whimper as he stepped. At first it was quite annoying. “Please stop that sound,” I kept thinking. Eventually I realised this was indicating something more significant. My big, strong friend was frustrated, hurt, and probably scared.

At one point he said, “When we get to the car, we should probably go to the hospital and have this checked out, don’t you think?” There wasn’t a sense of panic or fear between us, just an alertness to pay attention. There were a couple of spots where I told him to hold on to my pack for balance. I kept offering my walking stick but he refused. Crossing one stream, I slipped on a rock and landed in the water. Once my boots were soaked, I was less concerned with dryness and was more willing to walk through shallow swamp. This was helpful when helping Pete navigate watery areas. On that same crossing, Peter slid and landed flat on his back on a rock. Actually, the pack is what hit the rock, but it didn’t look like a good fall. The next day, he told me that at that point the numbness traveled faster and things went downhill.

As the next hour progressed I kept looking for a place to stop but the terrain didn’t provide a spot. How Peter got through one wet area walking on logs, I don’t know. Coming up from a ravine, I could see him swaying too far backwards. I grabbed his pack and pulled him forward. Once up he said, “I don’t think I can rely on my knees anymore.” My silent prayers were, “Lord, we need a place to stop and need it now.” I wondered if I needed to run for help. Maybe 15 minutes later, Peter eyed a small bed of grass under a large tree. He tossed himself down and said he needed to rest for a bit. Then he said, “The numbness is up to here” – pointing to his lower ribs. I thought, “What, when did that happen?” Above that line is your heart and lungs. Those need to keep working. What will happen if the numbness reaches them?”

I told Peter I was going for help. There was no cell coverage on the mountain so I was going to run until I could call someone.