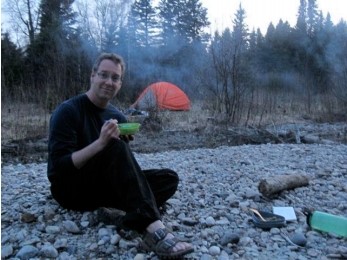 published by Webmaster in
News
February 9, 2023

Continued from the September 2018 issue…… I told Peter I was going for help. There was no cell coverage on the mountain so I was going to run until I could call someone.
I started to tape up my shins with self-adhesive tensor tape so that I could run through scrub brush without cutting myself. I drank a little water and ate some trail mix, but not too much because I didn’t want to get a cramp. I asked him where the car keys were and then proceeded to my next question without getting them. Peter suggested we mark down his GPS location on my phone. I also wrote out his 3 symptoms. “What should I ask 911?” “Find out what we should do. Is this really serious or should we keep going?”
Neither of us were particularly afraid, but I did wonder if this was some kind of heart failure. I thought, if he is dying I don’t want to look back on this moment with regret. So I said, “If this is the last time I get to see you, I want you to know that you have been an awesome friend. You’re an ahole at times, but I love you.” To which he replied, “I think we know that.” I kissed him on the top of his head and then I ran like a rabbit for help. I ran for about 10 minutes when I got a prompt to check my phone. I had one bar. But then it disappeared. I moved back and forth for a bit, then ran for another minute. One bar. I called 911. I could hear the operator but he could not hear me very well. “I’m on the Ochre River Trail in Riding Mountain and my buddy needs help.” “Hello? Pardon? I can’t hear you.” I tried a cou-ple of more times with various phrases but nothing re-ally worked. “Do you need ambulance, police, or fire department?” Of those choices? “Ambulance.” That got through. Over the next couple of minutes I could get through “Ochre River Trail. North parking lot.” He
asked, “Are you with him now?” “No.” Then my cell lost all coverage.
I decided to keep running. After about 20 more minutes, through trail that I would never have been able to get Peter through, I reached a cliff overlooking an-other mountain stream. I stopped – still no cell cover-age. I took off my jacket to cool down a little (my jack-et resists catching branches and thorns so I decided to run in it). An eagle flew overhead. I thought, “If it cries ‘Woe, Woe’ like in Revelation I’m going to lose it.” There were two more eagles flying over the stream, playing with each other.
Birds of prey – falcons, eagles, hawks – always give me a feeling of God saying, “I’m here. I’m watching over you. I’m aware.” I lost it. I cried. No, I bawled. Hands on knees, stumbling backwards, sobbing loudly. “What’s going on? I’ve left my friend to die in the woods. I’m running to meet an ambulance and then what? We’ll hike back in for 2 hours with a stretcher to find my friend’s dead body? And then I’ll have to call his wife and his kids and tell them their dad died? How can this be happening?”
After a minute or two, it was time to wipe my tears off my face and get back to running. It took about an hour from when I made the first 911 call until I got to the parking lot. Later, we figured it was about 8KM. That’s a bit slow for a run for me – but I did have sopping wet hiking boots on. There were also several places where I slowed down to navigate nature, or where I just ran out of steam. It had been 6 hours since a simple breakfast of oatmeal, dried fruit, protein powder, and coffee. Calling 911 again, they said they had received the first call and were out looking for us. They had sent ambu-lances to both the north and south parking lots of the trail.
It turns out Parks Canada was doing a training day and happened to have helicopters in the area. I could hear them fly overhead. The cell connection was clear so I gave them Pete’s GPS location as well as a list of his symptoms from the morning. They particularly liked the GPS numbers. He kept me on the phone for about 20 minutes, occasionally putting me on hold so he (Paul?) could relay information to Parks.
He did a quick check if I was ok – well, I was thirsty, hungry and alone in an unmarked parking lot without the car keys. But basically I was fine. He told me not to call anyone so that Parks could get through on my phone.
I might not have been able to call, but I could text people.

I texted Julia, then my Mom, then my house church, asking them to pray. The message was brief. “I’m at Riding Mountain Park on a hike with Peter. He isn’t doing well. I had to leave him and run to where I could get cell coverage. I’m waiting for ambulance.” Not much more I could say. The 911 operator had told me not to contact Darlene until I had something to say. “Call her when we have someone with Peter. Not that he is alone in the woods.” I asked God whom I should text. “Everybody ” I thought Darlene would probably find out sooner than I thought, so I texted Shawn to go give Darlene the message with instructions not to call so my phone could stay free.
Then I waited. I ate the rest of the dried fruit mix I had taken from my pack. It started to rain. I got cold. I sat huddled beside the wheel of the car, wondering if I should break a window to get inside and change into clean clothes. Parks said they would send a nearby staff member to pick me up but that they would be a while. I texted Julia more, just to talk with someone. Parks called back a couple of times, finally saying that they had located Peter and someone was with him – to which I replied, “So he’s alive?” Perhaps not my best worded response.
Back to Peter. After I left, he thought, “Is Curt right? Am I dying? Should I pull out my phone and video tape my last words to my family? No, I am going to live.” He realized that in a swamp, the moisture and cold will come from below. He got out his sleeping pad and got on it. His boots were soaked. He took them off and got into his sleeping bag. Smart. He said he thought, “God is good. God is good,” and fell asleep. An hour later, he woke up and heard helicopters overhead. He didn’t think they were for him; it hadn’t been long enough for them to be called, prepped, and flown to the location. But he got out the fly from the tent, which is bright orange, and wrapped it over himself. Also smart.
The helicopter crew spotted my pack close to Peter, found a place to land roughly a 100 meters away, and jumped out to get him. Apparently getting him back to the helicopter, through a swampy area, wasn’t too easy. They used his sleeping bag and some branches to make a stretcher but still got his butt wet along the way. When he finally got in, he thought, “Hey, I get to ride in a helicopter ” and also “Curtis is not here.
That means he is still down there.”
More to come in future issues…