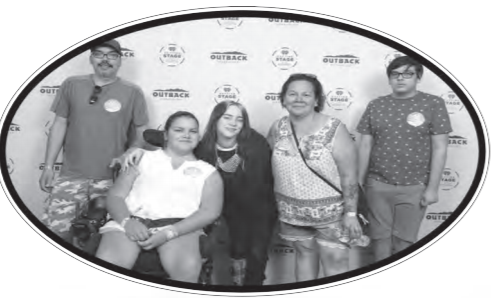 published by Webmaster in
News
February 9, 2023

Since 1983, charitable organization The Dream Factory has dedicated itself to fulfilling ultimate wishes for kids whose lives have been forever altered by chronic health conditions. The Dream Factory is based in Manitoba and all funds raised go towards helping local children and their families have once-in-a-lifetime memorable experiences outside of the hospital environment. Twelve year old Emilee Unger became the newest member of the “Dream Kids” this past month, when she was surprised on the Ace Burpee radio show with the news that the Dream Factory was granting her wish: to meet 17 year old singer-songwriter Billie Eilish.

When I asked her what it was like being on the radio, Emilee said “It was extremely awkward.” She wasn’t sure why she was there at first. And after Ace, Chrissy, and LTI surprised her with the news that she was going to Vegas to meet Billie Eilish, she didn’t want to start crying because she knew she was being filmed for a CTV News segment. “I didn’t want to cry on television!” She admits to crying happy tears in the car on the drive home while she, her mom, and her brother stopped for an unconventional celebratory food: McDonald’s hash browns.

The first hurdle of the trip was the airplane. “I’m scared of plane rides”, Emilee told me. It was her first time flying and she remembers looking around at everything and asking her mom, “How is everyone so calm?!” After surviving the flight, which connected through Vancouver, Emilee and her family finally arrived in Vegas. Her first impression? “It was so hot there. It was +39, with the humidity, it was +41. I was like: how do people live here?!” The trip not only included concert tickets to see Billie Eilish, but a whole host of other musicians. The family attended three concerts over the week they spent in Vegas. Emilee went from never having been to a concert in her life to seeing live performances from: Green Day, Cage the Elephant, the Backstreet Boys (Emilee is not a fan. “They sound like Justin Bieber with too much auto-tune”), Miley Cyrus, Camila Cabello, Alicia Keys, Steve Aoki, Marshmello, Kane Brown, Zac Brown Band, and Halsey in addition to the much-anticipated Billie Eilish show.

The day she was scheduled to meet Billie Eilish, she and her family went backstage at the outdoor concert. There was a tent set up and they had to wait a while because it had been specifically arranged for Emilee to meet Billie last so that they could have a bit more time. “Tori Spelling and her kids were in front of me”, Emilee says as if it’s nothing unusual to be surrounded by celebrities. Finally, Emilee got to meet Billie. “She’s prettier in person. Even before I hugged her, I was teary-eyed. Luckily I wore waterproof mascara!” Billie had read Emilee’s story that was submitted to the Dream Factory by her parents as part of the nomination process. She was just as excited to meet Emilee as Emilee was to meet her. “She knew my name, and my mom’s name, and my brother’s name, and she knew my dad’s name! She gave me a hug, and, yeah, she smelled good.”

When asked what she admires most about Billie Eilish, Emilee replied, “She’s her own person. There’s only one Billie. No one can re-make that. She does her own thing.”